I’ve been writing my M.A. thesis over the past couple months, and have been thinking a lot about the role of culture in how students learn, how teachers teach, and how we prepare students for the world.

Aikenhead distinguishes between Assimilation, Enculturation, and Autonomous Acculturation. These three approaches toward education, with a focus on cultures, need to be distinguished and understood.

Assimilation is forcing a new a culture onto a student whose worldview diverges from that of the culture. This is what was being done at Canada’s residential schools.

Enculturation is an attempt to bring students into a new divergent culture. This is what universities do for science students.

Autonomous Acculturation is finding ways for students to adopt a new culture under their own power. This would be like lending a student a popular science book.

Softer approaches are labeled “anthropological”, and are akin to taking a trip to the zoo. The teacher might say, “this is how scientists work”, and the students learn about scientific culture, rather than being turned into scientists.

The chess videos of Ben Finegold are a great example of enculturation. GM Finegold identifies heroes (Morphy, Carlsen), trades in quips (“never play G3”, “put it in H”), establishes values for the community (high ELO ratings, clever play), and relates the mythology of the field. The people who attend the lectures, or watch online, are submitting themselves to the enculturation provided by GM Finegold, and thus adopting the culture of chess as their own. There is little doubt that the children who attend his class (like the ubiquitous Arjen) see themselves as chess players, idolize chess grandmasters, and trade in the culture of chess.

What I am seeking to understand is how society should bring children into the culture of science. In the former Soviet Union, children went to schools that placed great emphasis on maths and the sciences: students who did well won prizes, and could be assured of successful careers within the Soviet technocratic apparatus. This is enculturation, as part of mainstream education, starting from young ages.

In the West, students who develop a love of science generally do it outside of their classes — through extracurricular activities, through popular science books and websites, or because of teachers who inspired them to continue thinking about science outside of school. This view helps to explain some of the continued disproportional representation of students from poor school districts, in spite of efforts to ensure high-quality classes for these students. These students, because of their socio-economic situations, and because of a lack of extracurricular programmes through which they can autonomously acculturate themselves to science, are less likely to adopt the culture of science as their own before the critical point of applying to university.

My question, then, is what role schools should play in connecting students with the culture(s) of science (and other cultures, like the humanities, arts, and trades). I think schools should teach using an anthropological approach, and provide plentiful opportunities for students to autonomously acculturate themselves during the course of their education. It is too much to ask that students jump wholeheartedly into a new culture every 45 minutes, but visiting new exhibits in a cultural zoo, followed by some time for students to deeply acculturate themselves via projects, and under the supervision of a cultural transmitter like Ben Finegold — now, that would be great.

I wanted to quickly write about two example student interactions. The first is Hans (more details), a student who doesn’t know anything, but is very good at picking up on the teacher’s cues. Hans is the archetype of question-wiseness.

The second is Fatima, a student who outlined “Fatima’s Rules“. These rules outline how a student who cares only about grades goes about studying, achieving a very shallow knowledge and little conceptual understanding.

Here’s something that worked better than I expected: students designing large (A0 size) posters. My grade 6 students made posters over the course of 5 classes. I told them that I would print “the best” ones. In this case, the local printer was able to print six, so that’s how many we printed. They look pretty decent, right? 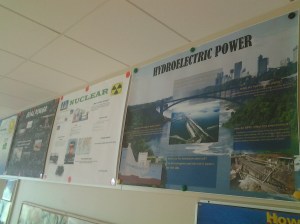 A couple days ago I posted about my grade 6 class developing a model for scientific investigations, which we subsequently used as a template for our lab notebooks. Now that we have that under control (more or less!) we can start to focus on the process of designing an experiment.

I have opted to focus on four factors that guide experiment design:

However, since the students have not done experiments in which they test multiple values for a variable, this is bit of a bootstrapping process. I opted to give the students written descriptions of simple experiments, asking them to identify 1-4 for each. However, despite my best efforts to engage them in the task, many did not even attempt to read for comprehension. I will need to follow up on this with our ESL support group.

The Science Game is an extracurricular activity I developed to teach students about how science really works. The game simulates the production of scientific knowledge by explicitly including a social feedback cycle. I presented the idea as a poster (linked below) at the AAPT summer meeting, 2014. Here’s the abstract:

Physics is at its most exciting when international teams are collaborating and competing to under-stand new ideas, but the social component of science has long been overlooked. Ford (2008) suggests that constructivist approaches to science education fall short unless they pair model con-struction with appropriate critique. I attempt to bring these together in The Science Game, an extra-curricular simulation of cutting-edge research. We asked students to investigate the properties of fat globules in milk, as seen under a microscope. The students developed knowledge claims based on Toulmin’s Argument Patterns (Erduran, Simon, & Osborne, 2004). These claims, along with the data and warrant, were distributed and critiqued using symposia, pre-prints, a journal, and informal communication. I will give an overview of the students’ work and evaluate the effectiveness of this approach for learning both knowledge and “grasp of practice” (Ford, 2008).

One of my coworkers asked me if I could build a model of human heart for an elementary school anatomy unit. I took the challenge to heart. After looking at what the internet had to offer (ie: here and here) I decided that I could do better. 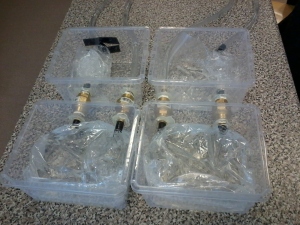 I wanted to use one-way valves (found at the entrance and exit of the ventricles) so that a fluid could be pumped realistically through the model. I was able to find some one-way valves at a local hardware store: the rest of the design followed from the valves. 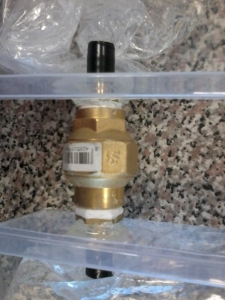 The model has (of course) four chambers. Each chamber is a sealed Ziploc bag — more about these later. The chambers sit in plastic tubs, which hold the valves in place in addition to catching any leakage. 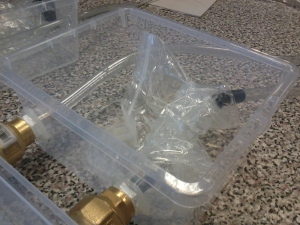 The circulatory system is simplified greatly: I have about 1 metre of plastic tubing to represent the arteries/veins to and from the lungs and the body. The emphasis here was to construct a 4-cycle pump, but adding some T-joints to create a more realistic aorta wouldn’t be too difficult. In the following picture, you can see that the tubing fits snugly onto the adaptor, which is screwed onto the one-way valve using plumber’s tape to get a good seal. I used some hot glue to hold the whole mess in place. 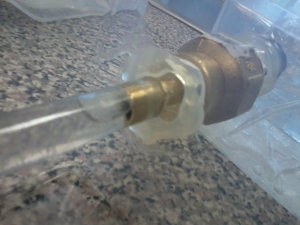 The most difficult part of this project was the Ziploc bags. I tried using balloons and a variety of plastic bags and sealing techniques before settling on the following approach. I cut small holes in the bottom corners of the Ziploc bag, then passed an inch-long piece of tubing through the bag from the inside. This gave a pretty good seal, which I held in place with electrical tape. Heat-shrinking the plastic didn’t work for me. 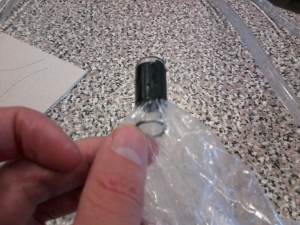 When squeezing the chambers, the Ziploc bags have a tendency to leak. Most of this comes from the zip seal popping open, but the bottom corners (as in the above photo) leak as well. The difficulty is getting a good, steady pressure on the Ziploc bag. Now it’s up to the fourth grade students to show me whether this model is feasible for use in the classroom! 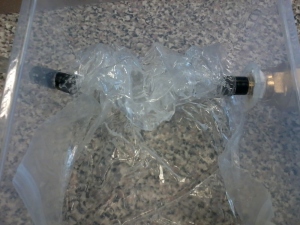 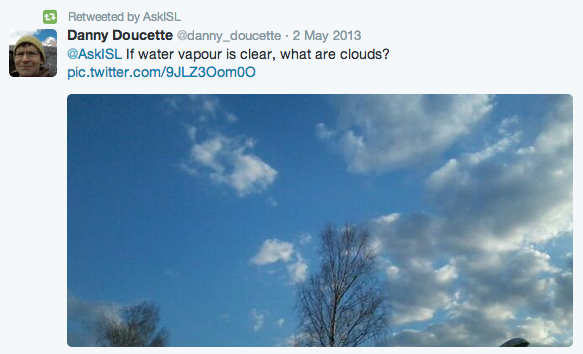 Twitter is a great way to push a quick message to a broad audience or, in other words, to get a quick shout in the internet hubbub. Over the past year, I have been trying different ways to use Twitter as a novel educational tool. I’m not interested in having students write tweets to report their work, as that can be done just as well with paper, pen, and the ability to count to 140. 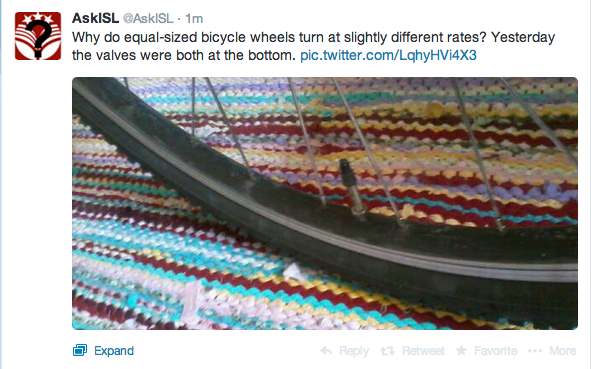 Instead, I think the power of Twitter is that it is always available. I can sneakily get my students to think about educational topics while they’re out with friends, hanging at home, or on the bus. I have been tweeting open-ended questions, usually accompanied by an illustrative photo, that might provoke students to think deeply about non-trivial science questions. 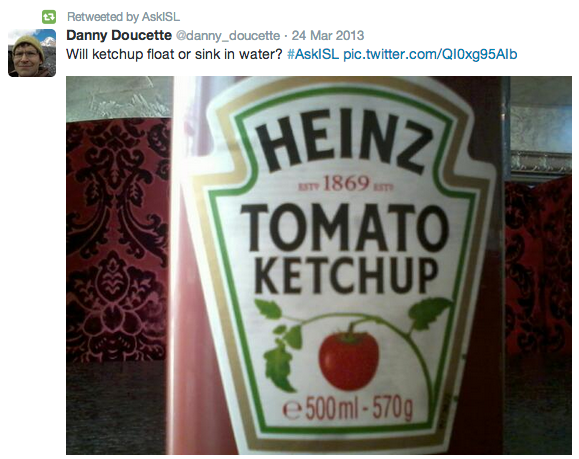 I try to tweet a combination of questions that can be answered with a calculation, questions that have generally-accepted answers, and questions that are truly mysterious for deep reasons. I personally love these last most of all, but I know many students find them frustrating. 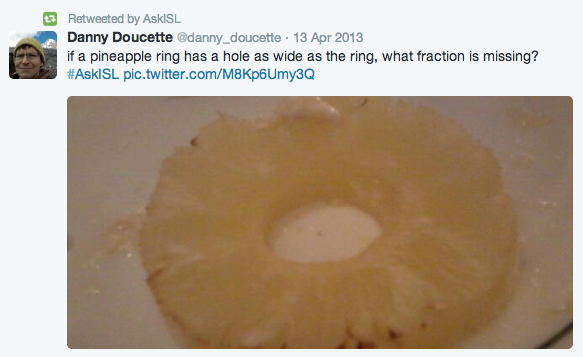