I spent the past week in Switzerland, on a trip with some of my high-school physics students.

We spent a day in Bern de-abstractifying an icon the Einstein museum, contemplating food waste at Äss-Bar (which sells second-day products from bakeries), and admiring marvels of nature and architecture at the bear pit and cathedral respectively. Our trip at CERN took us to the original Synchro-Cyclotron, which has been reimagined as a superbly-lighted display piece; to mission control at ATLAS, where a dozen physicists looked remarkably busy during a scheduled shutdown; and to a wonderful lunch-chat with my friend Sarah, who then took us back to her lab to talk about radiation-hardened electronics and detectors. We finished the afternoon with a trip up the téléphérique at Mont Salève. On the third day, we took a tour at Webster University in nearby Bellevue, where the students got a lot of good advice about university applications, before walking around the campus at the Université de Genève and spending a couple hours at the superb Musée d’Art et d’Histoire.

CERN devotes a significant amount of time and money to outreach. Researchers volunteer to lead tours, all the labs seem to have some sort of visitor display, and there are numerous programmes targeting students. However, it doesn’t always seem to come off effectively. Our tour guides have usually been enthusiastic about physics, but are unfamiliar with how to speak to people educationally: wait times, asking questions to maintain engagement and determine understanding, and finding ways for the ideas to explain themselves whenever possible.

The big ideas — the standard model, how the LHC works, why it is so big and expensive — are important and rightfully are thoroughly addressed. However, my students were much more engaged with Sarah talked about her own work. For them, photo-multiplier tubes and fibre-optic cables are just as exotic as the 1200 precision-engineered dipole magnets that largely make up the LHC ring, while also being more tangible. Sarah talking about her specific efforts to reduce the size and study the material effects of opto-electric connections was more effective than the lecture about the dipoles (and higher-order multipoles).

At the time we visited, the Globe was closed for (comprehensive, by the looks of it) reconstructions, and the Microcosm exhibit in the visitor reception building was much smaller than it has been in the past (representing the present LHC experiments only). CERN has decades of brilliant, revolutionary physics apparatus that the public never gets to see. Sarah stopped to tell us about Gargamelle, which is sitting in an unkempt courtyard behind the reception building, but there is otherwise little indication of the great CERN experiments of the past. I would love for CERN to show off some of the great artifacts they are surely storing, as a way to preserve the history of the institution.

Oh, and if you can use Lego to make a model of something, do it!

In Geneva, we sometimes heard this cliché phrase about the city’s international character. The city is famous for its banking, high-end watches, and lax taxation laws — consequently drawing in a population of haves from around the world. Yet while reminders of the multicultural character of the city are ubiquitous, this is a city of the well-off, and not a city of the world. The high cost of living, paucity of opportunities for the working poor, and surfeit of high-priced hotels ensure that this city of diplomacy is rooted in 19th-century notions of inter-state affairs, rather than to the idea of governments and diplomats as servants of the people.

This effect, where the world is flat for the moneyed but round as ever for the poor, is something familiar to those of us who work in international schools. I need to think deeply about how to instill the ideals of social justice for such a community.

One thing Geneva does well is food. We had some great meals, including Ethiopian, Lebanese, and Swiss cuisine. Like a friendly discussion in the Middle East about hummus, maybe food can be a way to bring us together. Yet it cannot be the meat of multiculturalism — and I have thinking to do about how to involve my high school students critically in our upcoming International Day pot-luck + song/dance performances.

During the trip, I read Mary K Gaillard’s memoir, A Singularly Unfeminine Profession. The quality of the writing and editing is unpolished, but the anecdotes speak clearly of a culture quite resistant to the inclusion of women physicists at the top levels, both at CERN and in the United States.

Sarah spoke with the students, and especially with the women interested in pursuing careers in STEM. Challenges remain, and both unhealthy environments and unacceptable behaviour from male leaders persist. However, Sarah was optimistic, saying that she had never felt like there was anything she couldn’t do.

Thus, moving forward, the task is to remain vigilant about bad situations and people, and to focus our efforts on the intangibles, like culture, that are driving the current gender gap.

“Knowledge repels the advances of Love”

The Museum of the History of Science in Geneva is a special place, and I was happy to share it with the students. Here are two things that struck me:

A motivation for the metric system

Use metal parabolic dishes to transfer infrared waves, showing that “heat” is a wave

My grade 11 math class needed some practice work cumulative frequency graphs [CFGs], and I wanted to go through the steps of developing a stats research project, so I decided to get the students to create a cumulative frequency graph involving box office gross for movies. However, as we were discussing how we’d collect data, one student brought up the poor representation of women in films, which led to the Bechdel test. Thus, we changed tack, and made a pair of CFGs — one for movies that passed the test, and one for those that failed.

Above are the films we selected (Golden Globe nominees for best motion picture, drama, from 2008 to 2015). I’m looking forward to seeing the analysis, and discussing implications, tomorrow!

The famous draw-a-scientist test asks students to draw a picture of a scientist. The pictures are then scanned for indicators such as lab jackets, science equipment, and signals of wealth. The results over the past 50 years have been persistent and, in many ways, disappointing. 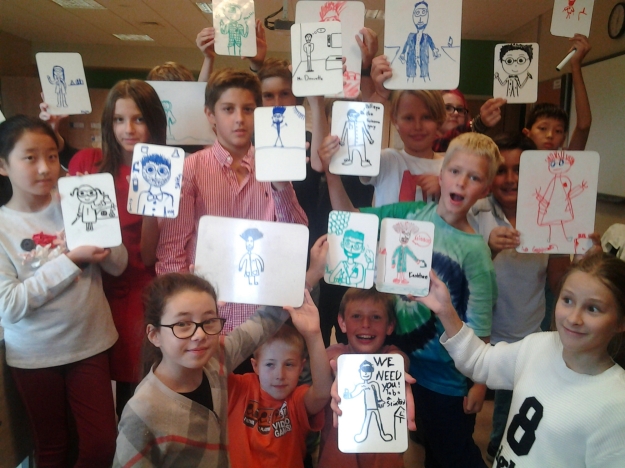 The vast majority of depictions are male. From 18 students in my 6th grade class, 14 depictions were explicitly male. 3 were female and, keeping with trends, none of the female depictions were drawn by male students.

The scientists are also depicted with a rich assortment of nerd symbols: 5 of the 18 had glasses (other than safety goggles) and 6 were wearing a bow tie. The bow tie numbers may be high because, as one student explained, many of the images were probably inspired by me. 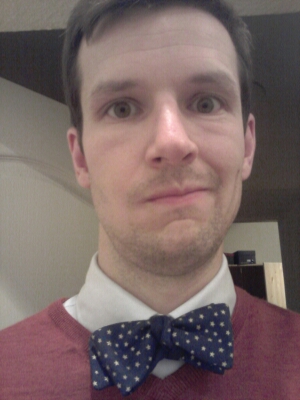 To probe the depth of this stereotype, I repeated the activity with my grade 11 physics class (45% female today). This time, however, I primed the students by doing two quick activities:

In both cases about half the class got the correct answer, which I confirmed but upon which I did not elaborate. Thus primed, surely the 11 students would envision their scientists as potentially being female. 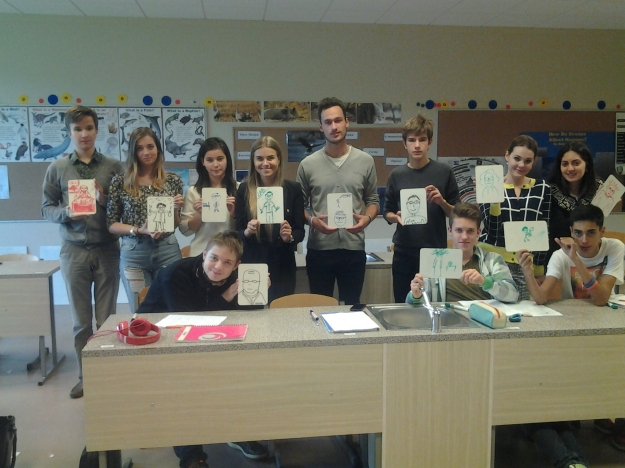 Alas, we drew 9 men and 1 woman. This time, Einstein was acknowledged as an inspiration by two students. Tellingly, each of the 11 scientists were depicted wearing glasses (not safety goggles).

The persistent stereotypes, which seem only to be reinforced as students travel through school, are damaging. The “nerd” stigma drives many from pursuing STEM careers and pushes those who do to the sidelines of society. The “male” stigma does the same.

Something interesting happened during a whiteboarding session with grade 6 today. See if you can spot it in the picture below: 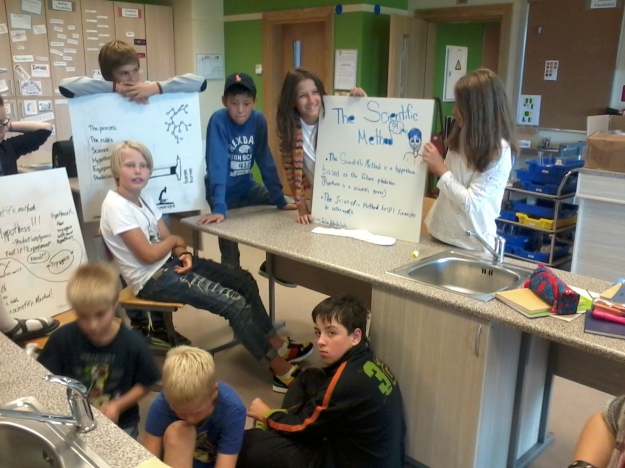 The girls at center and right drew a picture of a scientist to illustrate their board. Seizing the teaching moment, I asked why they drew a man: couldn’t women be scientists? Of course they could, was the indignant reply. One student quickly pointed out that many chefs are men, even though cooking is traditionally considered a woman’s job.

I told them that many of my best female friends were scientists, and fantastic ones at that. I also tried to explain that our picture of scientists being male is partly because men dominated the field historically.

I am going to put up a few pictures of great contemporary researchers (including women and “minorities”) around the classroom. Then, I will do the “Draw a scientist” test in a couple weeks to see what turns up. For these grade 6 students, I don’t see any evidence of a gender gap in enthusiasm, confidence, scientific skills, or content knowledge. Quite refreshing!

Yesterday (8 March) was International Women’s Day. The day has taken on a variety of different meanings. It’s a day to give flowers to wives and mothers in the former Soviet Union, for example. It’s also a great opportunity to draw attention to the significant challenges faced by women in society.

Sports are one way to equip young women with the skills they’ll need to compete with future male counterparts on an even playing ground. Here are a few key points, many based on this document:

1. Young women face tremendous pressure over their appearances. Anorexia is a disaster that is growing in scope without being addressed. The global cosmetics industry had an estimated turnover of USD 170 Billion, with remarkable growth for an industry that should be stable (for context, that’s more output than the entire American agricultural sector). Sports helps young women see that a healthy lifestyle and a healthy body image are preferable to being “supermodel skinny”.

2. 80% of female Fortune 500 CEOs reported being “tomboys” when they were younger, according to the white paper linked above. The team skills young people develop while playing sports are essential for future leadership roles. I think this is especially true for women, who are easily (and unfairly) labeled ‘bossy’ or worse.

3. “Self-confidence is a false idol”, as one of my grad school professors told me. Planning instruction around the idea of promoting confidence is foolish; instead, students should acquire confidence hand-in-hand with competence. For some students, academic competence is a hard-fought battle, and playing sports might provide a route to competence/confidence in an alternate field. As our school’s activities director puts it, extracurriculars are the “other half of education”.