We spent this week on the a=F/m paradigm lab. Once the students got their data whiteboarded, I began to see some problems — serious problems. The close relationships I had seen during my practice runs were nowhere to be seen: instead, the students had graphs dominated by systematic errors and an assortment of unorthodox, confusing ways to represent their data.

The picture above looks alright, except that the reciprocal of the slope (about 0.4 kg) is rather different from the 0.2 kg one would expect. Other groups clearly had trouble getting consistent data.

And others clearly haven’t bought in to the idea of the course.

In the evening, I replicated their experiments, and got results akin to the first graph. Today, I re-did the experiment with my hover disc, with only moderate improvement. It seems that the modified Atwood machine really needs a dynamics track to work. Drats. Maybe next year I will try to build an air track with a shop vac. 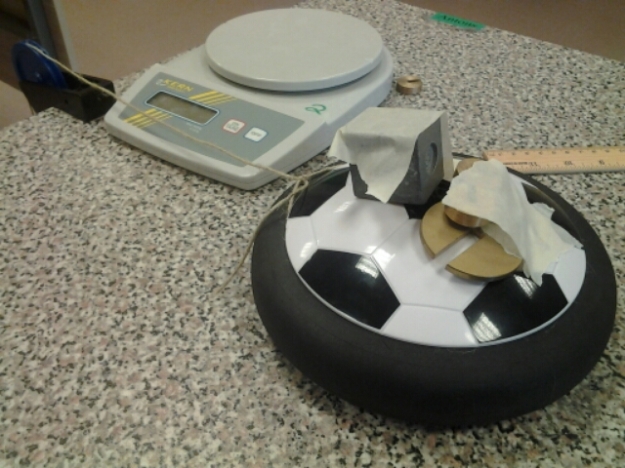 We finally began our Unbalanced Forces Particle Model today with, of course, a paradigm lab. The students brainstormed factors that might affect the acceleration of a cart in a modified Atwood machine (cart tied to a hanging rope), coming up with the mass of the cart and the tension in the string. Groups of two picked one of these independent variables and set to work.

We used Logger Pro to analyze video footage in order to find the acceleration, which I find works better than the motion detectors (in addition to being more conceptually relevant, and anyway, I only have one motion detector). The modeling materials suggest inclining the surface slightly to counteract the force of friction, but I rather disliked this idea: in my trial runs, I got good enough results with a flat table and our cheap plastic carts. We measured the masses on balances, and got the tension using the force law for gravity we discovered previously. 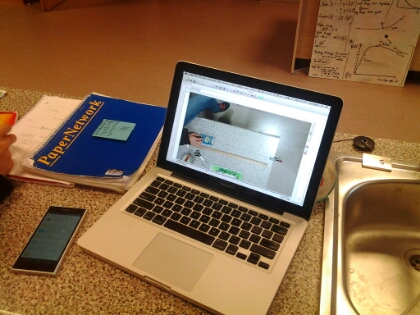 Probably the most difficult part was figuring out which range of masses and tensions to use, both as control and independent variable. I found that 10 to 70 g was about right for a hanging mass when the cart has a mass of 50 to 300 g. Smaller hanging masses and heavier cart masses in this range produced smaller accelerations, which were easier to measure. Smaller cart masses showed less friction.

We managed to collect the data and most groups began to compile it into a single graph. I asked everyone to be prepared to whiteboard their results at the start of class tomorrow. This should be a rich board circle, so I will try to encourage the students to take a more active role in the discussion.