This is the story about how I learned the real meaning of gender balance.

A couple months ago, I heard of this great way to integrate the Theory of Knowledge (the philosophy hub of the IB diploma) into my math classes. I took it a bit further, and ended up creating posters for eight different ways of knowing. These include reason, emotion, sense perception, language, faith, etc. My posters featured a picture of a famous mathematician whose work epitomized that way of knowing, along with a (carefully sourced!) quotation where they describe their process. 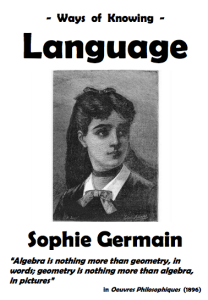 Making these posters was challenging but fun. Some were easy: Bertrand Russell’s work was pivotal to the language of math, Cantor’s work with infinities was deeply religious, and Edward Frankel’s great emotional love for the field is a great modern example. I sought mathematicians the students might encounter (Venn, famous for his diagrams), attempted to include those whose work is accessible to students, and tried including various cultural backgrounds where possible (Ramanujan for imagination). 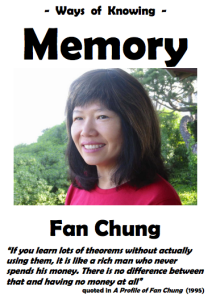 Throughout the process I knew that I was failing to include women. Noether almost made the cut, but I couldn’t find the right quotation. Partly, I felt that no female mathematician deserved to be on the wall beside Hilbert, Poincaré, and von Neumann (except for, perhaps, Noether).

I don’t think this was a sexist viewpoint, but rather a reflection of the reality of a past in which women were barred or strongly disincentivized from participating. I provide plenty of female role models for my students, do interventions when necessary, and build discussions about the culture of sexism that is currently poisoning much of STEM into my classes. But these posters were historical, and so I figured it would be okay.

When I first put them up, I asked my classes why they thought there were no women, and whether they thought it was fair. They understood: we can celebrate the history of mathematics while also recognizing its faults.

After a couple months, a colleague challenged me to create posters with women. We played a game on the bus ride home of coming up with role models for the eight ways of knowing. I tried to provide only female physicists (physics is my other subject) but found it challenging.

So I took a couple weeks to work through it, reading biographies and wikipedia articles when I could find time, searching for the origins of pertinent quotes. Finally, I had a set. But these women were not like the men. 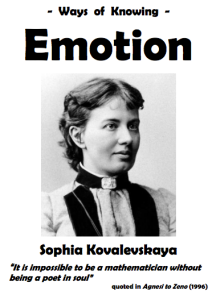 Three of the women were still living (compared with only one for the men). Several had contributed in ways that would not arouse the suspicion of the Fields Institute. One, a lecturer on hyperbolic surfaces, was better known for her crocheting than her equations. Few had names that appear in math textbooks. Several were unmarried throughout their lives. All had experienced sexism that slowed or derailed their careers. 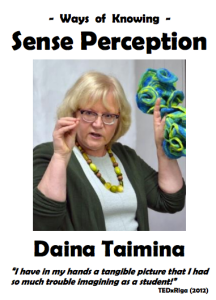 So, what did I learn from the inclusion of these women? That math is about people, not theorems. That contributions to the subject come in many shapes. That, contrary to my expectations, the history of mathematics is rich with female role models. And that gender balance is a necessary condition for cultural balance.